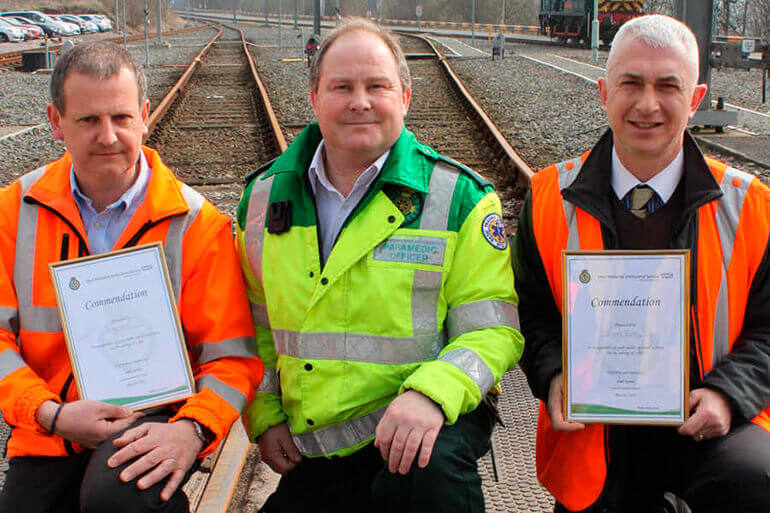 in Health and Safety, News

A trio of workers from a train maintenance firm have been praised for saving the life of a colleague.

Andy Wall, Barry Parkes and Russell Rowley, who all work at Alston, off Jones Road in Wolverhampton, came to to the rescue of an unnamed contractor who suffered a cardiac arrest.

Mr Wall, a senior production manager, said: “We were sitting in the office when one of our staff members ran in to tell us that a colleague had collapsed.

I went round and saw him on the floor gasping for breath. Russell and Barry quickly joined me and as they assessed him, I went to call 999.”

Mr Parkes, 49, is one of the members of the train maintenance teams and has worked for Alstom for 14 years.

Like many other staff, he is a trained First Aider.

Mr Rowley, 42 and a health and safety manager, had only worked at the firm’s Traincare centre for a week.

He said: “Being my first week at the company I didn’t really know many people and didn’t know Barry, Andy or the gentleman who had collapsed very well.

But nevertheless, whilst Barry stayed with him, I ran to get the defibrillator from the office.

When I came back, he had stopped breathing.

As he’d collapsed in an awkward position by a table and some chairs, Barry and I had to quickly pull him clear so that I could start CPR. Whilst I did CPR Barry opened up the defibrillator to get it ready. No sooner had we started CPR than we were joined by a paramedic who told us to keep doing resuscitation whilst he got his medical equipment out.”

The paramedic shocked the man’s heart on scene and, thanks to the efforts of the trio, the man started to breathe for himself.

He was taken to New Cross Hospital for emergency treatment and has since made a full recovery.

“The actions of Andy, Russell and Barry are extremely commendable as saving a life is the best gift you can give,” he said.

This case just shows how important early CPR is when someone is in cardiac arrest. If it hadn’t been for their decisive actions, the outcome would’ve almost certainly been less positive.

The quicker you start CPR and shock a patient in cardiac arrest with a defibrillator, the better the chances they have of surviving.”