Paul is one of our highly qualified Lead Trainers operating from Cumbria and has been with Nuco Training since 2006.

When did you first learn first aid and why?

I qualified as a Bronze Medallion lifeguard in 1977! and Award of Merit Pool Life guard in 1978 as I could use the qualifications to gain holiday employment in pools and leisure centres during my time at university. Holding these qualifications meant I also received extra pay!

Both qualifications involved an element of first aid and as a sports coach in many areas the coaching qualifications required a first aid certificate. As a gymnast I already knew a lot about support bandaging, looking after strains and sprains, blisters on hands, etc. and so first aid was already ingrained in me! … especially as I wasn’t the best gymnast and landed on my head a lot! (some of my course delegates would say that explains a lot too!)

I have been involved in first aid and its associated activities for over 35 years and continue to find it challenging and rewarding.

What made you choose to become a first aid instructor/trainer?

As a qualified teacher, sports coach and manager I have been involved in teaching, training and staff development as part of the positions I have held. This led into teaching other people to teach/coach/manage, as I have always found it very rewarding to see individuals develop their skills, abilities and confidence in whatever area. Realising the amount of money being paid to external agencies to train staff in first aid I volunteered/decided to take it on myself, and to deliver in-house courses that would be much more cost – effective for the organisation and would be better taught! Some courses I had been on had been dire and I was certain I could do better! I later moved into the Nuco system and qualified and certified through them … a much more positive experience! I also delivered some external courses for them.

When I decided to move away from London and full-time employment and become a freelance trainer I became part of the Nuco lead trainer team delivering their instructor courses and the, now – Level 3 award in E and T. Alongside my own courses I predominantly now work for Nuco Training running these courses and would never want to move elsewhere.

What would you say to someone considering becoming a first aid trainer?

If you have a genuine interest in first aid then go for it! Unlike a few other vocational qualifications first aid can be delivered in a fun, multi faceted manner which makes it enjoyable to teach and engaging for the students. It is extremely worthwhile to teach someone to be able to save a life! A school/ client rang me once to let me know that a young lad had a cardiac arrest whilst out rowing … the cardiologist had just rung the school to congratulate them on the CPR performed which had basically saved his life. The rowing coach had performed the CPR in the rescue boat … and I had trained the rowing coach in first aid. Even just one life saved makes it all worthwhile and will keep me going for another 30 years! 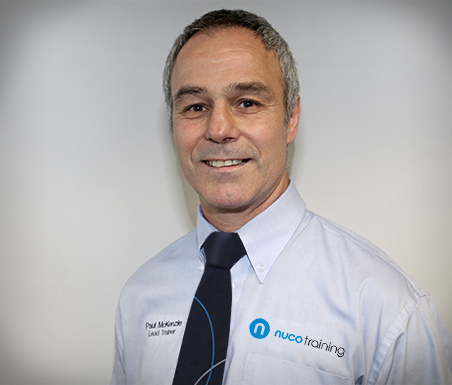 Despite my initial reservations and nerves, I was warmly greeted by Paul on my arrival at the Holiday Inn, this informal chat set the tone for the duration of the course. I was fortunate enough (as where the group) to receive first class tuition and guidance in every aspect of the course, no stone was left unturned as Paul introduced us to varying instructional methods whilst coaching us with our own micro sessions and work. The learning curve was steep but the pace of delivery was perfect and Paul ensured everyone understood each section before moving on. I have been on many courses in my lifetime (as a soldier and civilian) and witnessed first-hand the negative effect some instructors can have on their group, this was the polar opposite and I commend you and NUCO for employing an Instructor of this calibre. I have already requested with my Line Manager that I undertake further training with NUCO and I look forward to my next course with you.

Here are some of the most recent reviews from individuals who attended a course with Paul: